Homeopathy and the pandemic 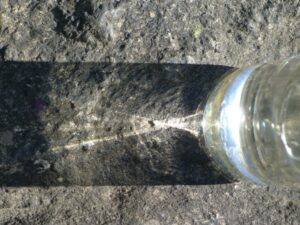 Rays of light from the sun, passing through water. Does water hold a key to our health? Photo: Lasse Johansson

The ongoing pandemic gives me opportunity to write the following reflections:

During the Spanish flu in 1917-1918 doctors treating their patients with homeopathic remedies reported significantly lower mortality rate than their colleagues, in many cases with no mortality at all. For ample examples, see this reprint from a paper published by Dewey in 1921 with testimonials from 50 homeopathic doctors of the time:

The testimonials speak for themselves. Then perhaps in this pandemic we could draw on the expertise of the homeopathic doctors of that time. Remember that a century ago some 25% of U.S. doctors would use homeopathic remedies.

I would particularly like to point the attention to a work by E.B. Nash: “Leaders in respiratory organs”, written in 1909, which is a book on therapeutics of acute catarrhal fevers, influenza, bronchitis and pneumonia.

Nash was writing with more than 40 years of experience of treating epidemics with homeopathic remedies.

He often preferred giving the medicine in the 30th potencies (30 C), a dilution at which not a single molecule of the original substance remains, just the information (or as Nash would have expressed it: “The curative power”) would be retained in the water/alcohol solvent. He would often give a few pilules (with an absorbed solution of the remedy) dissolved in half a glass of water, given dessertspoonful with 1-2 hours interval until improvement would set in, and then cease.

A hundred years later we still lack an adequate scientific explanation for these effects. Notwithstanding that, we should remember that medicine, like physics, is an empirical science, and that when our present map differs from reality, we should rely on reality.

Nash would typically divide acute influenza cases into a few categories, a main indication being whether pains were situated mainly in the bones , “break-bone fever” (Eupatorium perfoliatum), or in the muscles with deep prostration and trembling (Gelsemium) or if they were intermixed and often with stitches and nausea (Bryonia). (For gastric influenza, with vomiting and diarrhea, Baptisia could be added as a fourth.) Each of the homeopathic remedies have typical seats of action in the body, and in acute diseases they are often very clearly manifested (as different from in many chronic cases). Quoting Nash:

“One or the other of these three remedies will in the majority of the cases, according to my observation, control the case, or so modify it as to make subsequent treatment easy.”

Should pneumonia develop, Nash gives extensive indications: Aconite (followed by) Sulphur being the most indicated remedies in the beginning. Again following Nash:

“These two remedies will abort many cases, if we are called to a case of this character in time, as I can affirm from experience.” If not, and if hepatization has already set in, a longer list of remedies comes into play and more skill is required, Bryonia and Phosphorus probably standing at the head of the list. I refer to Nash for the details.

Comparing the indications of Nash and others with the reported symptoms of the ongoing pandemic, with its flu-like characteristics but with some striking features such as: dry coryza (i.e. absence of discharge), headache, dry cough, sore throat, a marked tendency of the illness to propagate from the upper down into the lower respiratory tract, diffuse nausea and a rather slow progress in general, would in many cases indicate “Bryonia” as a remedy that matches a majority of the cases, a possible “Genus Epidemicus”.

Another thing could be noted: Covid-19 is a corona virus, not an influenza virus. Of the seven previously known corona viruses that infect humans, four give rise to about 25% of all common colds, and have been in circulation for a very long time. This would indicate that we should look for our best-matching remedies rather along remedies indicated for severe colds. Particularly colds with a tendency of going into the lower respiratory tract, with bronchitis and pneumonia as complications. Bryonia would particularly match this, but more remedies could be considered.

If there, as reported in many cases of covid-19, is a rapid onset of fever, other remedies could come in earlier – the most prominent perhaps being Aconite with its associated anxiety, possibly Belladonna if the power of the illness tends to the head, and Ferrum phosphoricum which stands in between.

I would like to suggest Natrium muriaticum (30C) as an indication to look out for too, which has a track record in intermittent fevers (see Allen H.C., “The Therapeutics of fevers”) and chronic colds. Onset of fever in the forenoon (particularly around 11 AM, but could be in the afternoon too), with full or banging headache, head feeling too heavy, severe languor and stupor, profuse saliva in the morning, dry and cracked lips, fever blisters or other complementing indications for which I refer e.g. to Cowperthwaite’s Materia Medica.

Hope this will spark some interest.

Nash’s book is in the public domain and can be downloaded here:

This entry was posted in Reflections. Bookmark the permalink.